One thing is needed before Brexit: a coherent government 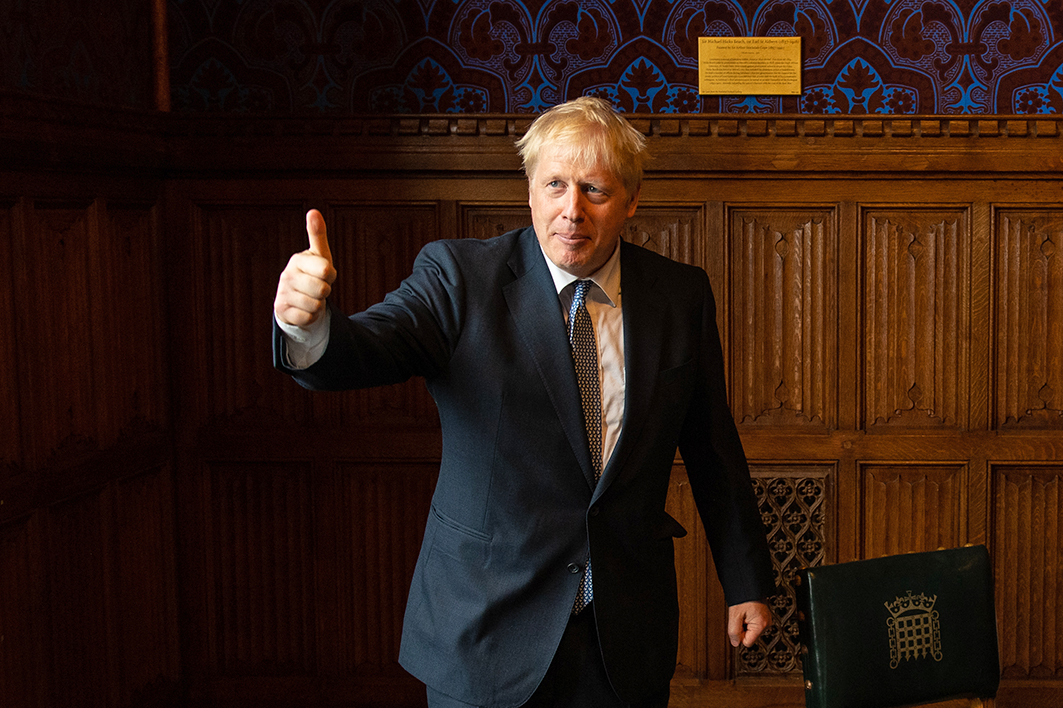 Britain’s power shifts get longer as its politics get messier. When Theresa May announced her departure outside 10 Downing Street on 25 May, the gulping climax of her address dominated the news agenda for days. But that instant ballyhoo eclipsed another snag: her six-minute homily was but the prelude to a slow goodbye. A month on, as exhibitionist Boris Johnson and urbane foreign secretary Jeremy Hunt vie to replace her, Therexit is just halfway to the finishing line.

May remains Britain’s prime minister and the Conservative Party’s (acting) leader until the bout’s winner is declared on 23 July, triggering a double shuffle the next day between Buckingham Palace and Number 10 — and, if Boris wins, a likely no-confidence vote from the Labour opposition. A scrappy House of Commons, whose triple snub to the PM’s withdrawal deal with the European Union belatedly sealed her fate, might soon be fluked into a general election. After insurgents battered the two main parties in recent local council and European parliamentary elections, there is no safe bet on the outcome.

Après May, le déluge, then? In its way that would be an apt sequel to three stagnant years. But there’s one already on show, for May’s two-month valedictory brims with “legacy” business: plans to splurge over £27 billion (A$50 billion) of public funds on favoured causes (now meeting Treasury pushback), video messages, Donald Trump’s state visit, two EU summits, the G20 summit in Osaka, and more. Decorous some of it can look — a prime minister bidding a stately retreat — but the whole performance is another sign of how Brexit’s paralysis has further degraded British politics.

PM-to-PM transitions, once brief, have been stretching. In 1997, a couple of hours in the blissful dawn of New Labour’s rout of the Tories did the job, with Tony Blair arriving in Downing Street minutes after John Major left, the very choreography an uplifting emblem of popular sovereignty.

In 2007, it took three days for Gordon Brown to succeed Blair in a mid-term, vote-free stitch-up; in 2010, five for Brown’s loss of Labour’s majority to usher in David Cameron and Nick Clegg’s rose-garden bromance. In 2016, though, nineteen days passed from the Brexit referendum and Cameron’s vanishing to May’s quiet rise.

That interval was an augur of Brexit’s disabling impact on the polity. It might have been longer, for the vote to leave the EU had shattered an unready government and rattled even the victors. No one knew what to do. A pyrotechnic Tory struggle left May the unexamined winner. Her implicit job contract, which was granted at that stage by all but the extreme partisans, was to reach acceptable Brexit terms while forging a consensus that bridged the deep fissures reflected in the referendum’s 51.9–48.1 per cent result. A tall order for a first-rate PM, but Theresa May proved to be a dud. Under her care Britain became a GINO (government in name only) country.

That became unmistakable at the snap 2017 election, when the Commons majority she had inherited from Cameron was lost and her authority shredded. A stultifying cabal mentality vaporised cabinet trust. She had no leadership skills, shrank from the people, and spoke in robotic and oft-repeated phrases. Her approval ratings plunged close to (though only once below) Jeremy Corbyn’s. With a bare policy cupboard, even as challenges accumulated, Brexit was May’s crutch — but it acted as homework not strategy, far less vision. Here she made crucial blunders. Only when her backchannel EU deal had been spiked did the walls at last close in. Even then she went reluctantly: “the sofa is up against the door,” an insider’s barb, was at the end almost believable.

Incapable as May was for so long, the Conservative Party kept her in place and then allowed her to set her terms of departure. (Such a reward for epic political failure is pervasive in Britain’s honours system and elsewhere.) It was among the most socially corrosive of deeds. The party’s next step? It rebooted the 2016 formula with a more bloated and protracted contest — ten candidates, eight weeks — as if the last three years never happened and hadn’t shown, foremost, that treating a national crunch as a partisan game only delays the reckoning. As a spectacle, the brawl for the Tory crown offers unmissable drama in real time. But in its snail’s pace and indifference to the public, it is a fitting coda to Britain’s three locust years in Theresa’s dismaland.

May’s GINO had many facilitators. The fact that survival became her chief goal, fed by recurrent advisers’ own bunker mindset, ranks high. The Tories’ wafer-thin Commons advantage, courtesy of Northern Ireland’s Democratic Unionist Party, and cold fear of a general election that might well bring Corbyn’s Labour to power, shrivelled horizons. The dire fixed-term parliaments act of 2011 cushioned the incumbent’s weakness. Brexit’s endless ennui fortified and toxified the core leave-versus-remain division: the worst of all possible outcomes, but giving May — who had nothing to say about it — more reason to hunker down.

On a major question of statehood, an equally riven political class could give disaffected citizens no direction or assurance. In response, millions tuned out or switched parties. Polls, think-tank reports and the occasional by-election confirmed growing alienation. A bigger measure arrived with the five-yearly elections to the EU parliament on 24 May, the first pan-UK choice since 2017 and thus a quasi-referendum.

The event had a bizarre aspect, in that the United Kingdom would be sending representatives to a body it wanted to break from. But having missed its 29 March deadline to leave the EU, and having secured from Brussels an extension until 31 October — “Please do not waste this time,” was the not unfriendly advice of Donald Tusk, president of the European Council — it had a legal obligation to hold the European parliamentary vote. Conditions were perfect for a two-sided backlash from those angered by Brexit’s delay (“Get on with it!”) or encouraged (“Call the whole thing off!”). And the results were chilling for Conservatives and Labourites, as Nigel Farage’s start-up Brexit Party took a 30.7 per cent vote share, and the firmly pro-EU Liberal Democrats (19.7 per cent) and Greens (11.7 per cent) did well, while Labour won only 13.7 per cent and the Tories 8.8 per cent — the two parties’ smallest-ever proportions in a national election.

Tory and Labour voters’ mass defection to parties with an unambiguously pro-Brexit stance recasts the historic giants of British politics as dinosaurs. Most Conservatives now agree that leaving the EU on 31 October is central to the party’s survival, for otherwise the populist Farage will cannibalise their base. The EU must, they say, agree to remove unacceptable elements of May’s deal (principally the “backstop” ensuring an open border in Ireland, which affects UK sovereignty), else the UK should opt for a “no deal” departure. The latter is now equally within the EU’s competence — and leaders such as Emmanuel Macron, fed up with London’s muddle, are tempted.

All this bolstered Conservative members’ wish to see Boris Johnson as their clear first choice to follow May. A tight race for the runner-up was edged by Jeremy Hunt amid claims of Borisite MPs “lending” him votes to ditch Michael Gove, seen as a deadlier rival. Johnson began the one-on-one stage in a graceless mood, avoiding a scheduled Sky News debate and then, at the first Tory hustings, lazily muttering about tough questions (“There’s some quite hostile bowling, I may say”). This win-by-shirking approach was soon replaced under a reshuffled team. Mark Fullbrook is the supremo, while C|T Group comrade Lynton Crosby advises BoJo by phone. If the polished Hunt starts winning hearts among the grassroots — and he has made a bright start — things could yet go according to the ugly playbook so well reviewed by James Murphy in Inside Story.

In a parallel Borisesque farce, a late-night, high-decibel row at the Camberwell flat of his partner, campaigning PR executive Carrie Symonds, led neighbours to call the police then pass to the Guardian an audio of the incident. When this turned out to be harmless, and the arty couple’s sympathies turned out to be pro-Labour/EU, culture warriors’ fuel tanks overflowed. More seriously, an alleged juicy morsel from Carrie’s harangue (“You just don’t care for anything because you’re spoilt! You have no care for money or anything!”) struck Dominic Lawson and Rachel Sylvester, respected columnists, as speaking truth to character.

About that, no one reading Sonia Purnell’s incisive and deeply researched 2011 biography, Just Boris: A Tale of Blond Ambition, can have any doubts. Now, for the umpteenth time in his career, the media is filled with details of his rakish personal life (which, with reason, he now refuses to discuss) and professional misdeeds. The extreme virulence of many assessments is striking, especially from Tory warhorses (and thus long acquaintances) such as Max Hastings, Chris Patten, Michael Heseltine, Matthew Parris and Simon Heffer. If concentrated gut loathing could bring a man down, Johnson would be toast.

Yet the original celebrity politico thrives on all the abuse, or so it can seem. The constant noise around him may even help drown out his actual record: paltry as an MP (2001–08, and from 2015), mediocre as London mayor (2008–16), facetious as foreign secretary (2016–18). Tory loyalists’ affection is impervious, though, while street-level recognition remains more buoyant than hostile. Two-thirds of the 160,000 party members — 71 per cent male, 97 per cent white, average age fifty-seven — say they’ll vote for him.

Where they at least are concerned, the editorial overkill (as in Trump’s America) likely damages the purpose more than the target. By way of contrast, Johnson supporters’ quiet misgivings deserve more attention. Endorsing him, the Spectator admits a “wide range of risks,” such as “he could self-destruct at any point,” but this is a “gamble the Tories have no choice but to make.” Paul Goodman, wise editor of Conservative Home, notes Johnson’s indifference to “the irksome restraints of conventional morality,” concedes that he is perhaps “not the prime minister that the British people deserve,” but gives the journal’s approval “on a wing and a prayer.”

Alarmingly close to the summit as Boris now is, the guarded tone of those two endorsements resonates far more than the de rigueur fulminating. Between the lines is a lurking fear: that after the obligatory bromides on the steps of Number 10, pitched into emergency mode from the first hours, facing the relentless demands and pace of the job, with harsh mood music at home and abroad, the clanger and insult meter already whirring, cabinet members jostling for preferment in the court of the “world king” and a Commons seething with no-confidence and election calls, all Boris Johnson will deliver is his own GINO.

A polity stuck in Brexit limbo has been forced into fantastic contortions to prove itself alive. Anointing a clown-messiah would cap them all. Rosa Prince, ace biographer of Corbyn and May, sees karma in the way Conservatives “will be giving Brexit Britain the prime minister it deserves — a clown.” In a country so out of shape, such absurdism makes perfect sense. But gifts can be sent back and limbs revived by exercise. Ahead of anything else, Britain needs what has been lacking for three years: a coherent government with real authority. Time, then, to prepare for the Borexit power shift. •