All the polls are in, so what’s the best guess?

There’s still plenty of uncertainty in the details, but Peter Brent takes a punt on the House of Representatives numbers 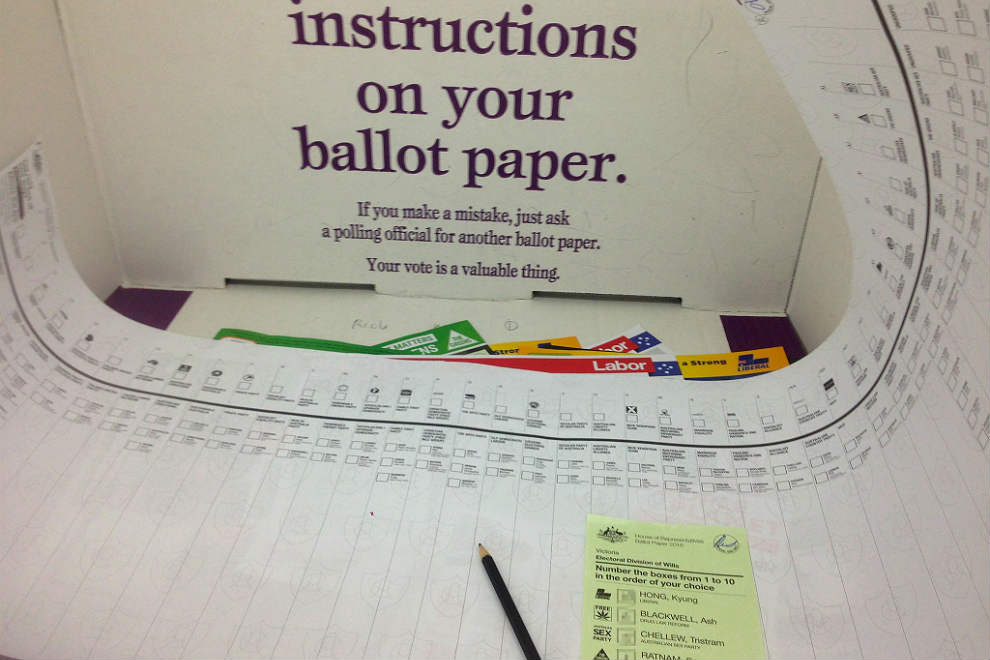 The final election opinion polls are out, and they’re hovering around where they’ve been for most of the campaign – the 50–50 two-party-preferred mark, give or take a per cent. But as we all know, it’s votes in seats, not the national tally, that count, and that equation favours the Coalition – at least according to public polls in individual electorates, which historically have hit-and-miss accuracy, and leaked internal party polling, which is also less reliable than those who spruik it would admit.

There is the added problem, applying to all of the above, that the smaller the total major-party primary vote, the more rubbery the estimated (or even measured) two-party-preferred support. Take this morning’s Newspoll, for example, which puts after-preference support at 50.5 to 49.5 in the Coalition’s favour, from primary Coalition support of 42 per cent, Labor 35 and Greens 10.

Breaking with convention, Newspoll has helpfully itemised most of the 13 per cent “others.” The Nick Xenophon Team is on 2 per cent, it says, and “Family First is polling 2 per cent, Pauline Hanson’s One Nation, the Christian Democratic Party and Australian Liberty Alliance are on 1 per cent each, while others make up 6 per cent.”

Given the right-wing leanings of all those parties except NXT, whose preference flow is utterly unknowable, 49.5 per cent looks, on the back of my napkin, optimistic for Labor. The answer is obviously in the other 6 per cent, based on flows at the last election. But 2013 saw a historically favourable preference flow to Labor, say 60–40 in total.

And if the national result does wash through to 50.5 to 49.5, there is no reason to expect a “close” result – however you define “close.” In 1987 the Hawke Labor government netted eighty-six (out of 148) House of Representatives seats with just 50.8 per cent of national two-party-preferred support. A little over a decade later, in 1998, a larger national vote, 51 per cent (51.1 if you slot in an estimate for Newcastle, where a candidate died and the election was postponed) hauled the party just sixty-seven (of 148).

Not being sure which side will win is also no reason to expect a close result, let alone a hung parliament.

This election (like most of them) has seen a record proportion of pre-poll votes, but fear not: thanks to legislative changes made six years ago, the bulk of them, probably around 90 per cent, will be counted tonight (or at least included in the count – some safe seats will be deprioritised). That’s not the case with the growing number of postal votes, likely to be around 10 per cent of turnout this time, which must have been popped in the mail by yesterday and don’t close for two more weeks.

The betting markets, meanwhile, which to varying degrees have always favoured this government to be re-elected, moved in two seemingly contradictory directions this week. Punters have become more certain of the outcome, but the expected size of the win has narrowed. Until the previous week the most favoured five-seat band for the Coalition haul was eighty-one to eighty-five; it has finished up on seventy-six to eighty (out of 150, the smallest that still constitutes a majority). Betting markets are not the wonderful predictors some people insist, but they do efficiently distil general expectations.

So, here’s what I reckon will happen in the House of Representatives tonight. Seats will move in both directions, as they usually do. (The most recent exceptions are 2013, 1998, 1996 and 1983.) NXT looks even-money to pick up at least one lower house seat in South Australia. (Does that sentence contain enough caveats?) Non-major party MPs Andrew Wilkie, Adam Bandt, Bob Katter and Cathy McGowan are each more likely to survive than not. (They are listed here in decreasing order of likelihood.) The Greens will... I have no idea what the Greens will achieve in the lower house. Batman and Higgins will be interesting.

And returning to South Australia briefly, a fourteen-year-old Labor government has at least the potential to cause problems for federal ALP sitting members. Add to that the high NXT support, with unpredictable preference flows, and South Australia is the “expect the unexpected” state.

(In addition, the AEC must choose, when counting, which two candidates to distribute preferences between. If it discovers it’s chosen the wrong two it will have to start again. So this may mean delays in some seats in South Australia.)

Back in March, I suggested an easy Coalition win was likely, with a mid-point of expectations at eighty-five seats. The public and leaked polls aren’t really pointing to this, but none of them are what they’re cracked up to be. And don’t forget the undecideds.

So I still reckon it’ll all wash through to a comfortable Coalition victory. And my best guess remains around 85 out of 150 seats.