Boris Johnson, outside in

Kenneth Branagh portrays the former PM’s behaviour with startlingly accuracy. But what’s going on behind the eyes? 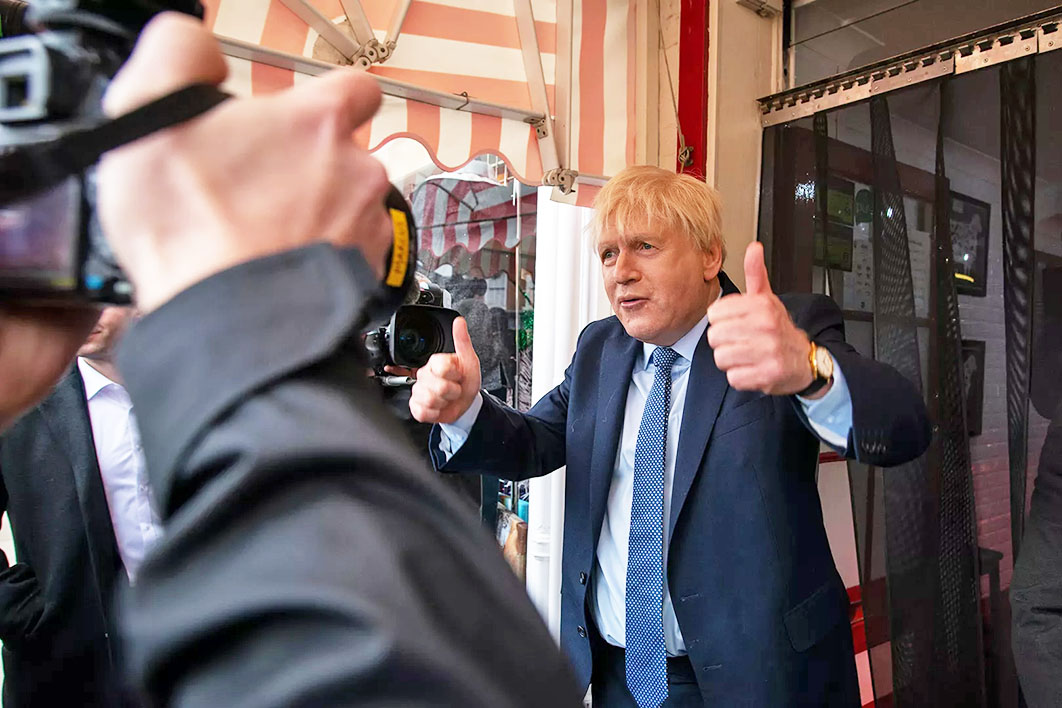 “This Johnson, like Richard II, is weak rather than bad.” Sky UK Ltd

When Kenneth Branagh’s Boris Johnson quotes Shakespeare in the trailer for Sky’s new six-part docudrama This England, he ends with the words, “This blessed plot, this earth, this realm, this England.” But the original speech, from Richard II, doesn’t end there. After evoking “this happy breed of men,” John of Gaunt’s account of the state of the nation turns dismal. Under a weak and ineffectual monarchy, England is destroying itself from within.

While the rest of the speech could serve as commentary on the pandemic-ridden country portrayed in the series, Branagh interprets Johnson as the eternal optimist — or at least the inveterate performer of optimism. The camera repeatedly follows him from behind the scenes, as he braces himself for yet another grim meeting or fraught public announcement, to his ever-buoyant performances before an audience.

This England opens as results of the 2019 Tory leadership contest are awaited. But there has been a prior announcement: Johnson has been contracted, for a princely sum, to write a biography of Shakespeare. In reality, this caused tensions during his early months of government, with those around him believing he was distracted from the larger and more urgent role of prime minister.

Here, though, the bard seems to serve as a kind of spirit guide for Branagh’s Johnson, putting words in his mouth and a spring in his step at critical moments, allowing him the passing illusion that he is a second Churchill. Behind the role-play he’s a bumbling, incoherent mess, always on the verge of meltdown.

His usual strategies of reality-denial and clownish bravado prove ineffectual in the face of the pandemic, and the full meltdown occurs when he has to be taken to emergency after contracting the virus himself. It’s a defining moment in the series but also points to a fundamental problem in its conception.

Shakespeare’s histories offer many dramatic models of how the fate of the country and its people can hang in the balance. Treachery, corruption and civil war, threats of invasion, plague and famine — all may contribute, but the deciding factor is the character of the head of state. A weak monarch like Richard II enables all these evils to take hold; a bad one, like Richard III, actively fosters them. In dramatic terms, the distinction is radical.

This England attempts a Shakespearean vision of how tides of chaos wash across the land when things go wrong in the seat of power. Sequences filmed in hospitals and aged care homes, created with such realism they might be documentary, alternate with the crisis meetings in Number 10 and scenes from Johnson’s private life. But this Johnson, like Richard II, is weak rather than bad.

That portrayal not only blunts the dramatic edge but also — and more seriously, in view of the ongoing crisis in British government — fudges the political dynamics. As a figure whose mental world is composed more of poetry than politics, Branagh’s Boris has an air of pathos. Like everyone else, he’s caught up in the workings of fate, and if he lacks the grit and courage to take up arms against the sea of troubles, well, that’s kind of sad — for him as well as all the good people we see weeping on the phone to dying relatives.

Perhaps writers Michael Winterbottom and Kieron Quirke were too readily seduced by the idea of 10 Downing Street occupied by a classically educated political maverick with a lot of Shakespeare in his head. Quirke has a first in classics and Winterbottom’s credits include a series of films in which virtuoso mimics Steve Coogan and Rob Brydon exchange literary impressions in romantic locations.

Their title, This England, signals association not just with Shakespeare but also with a larger range of mythic and symbolic traditions: the Arthurian legends revived in Pre-Raphaelite paintings, Blake’s “Jerusalem” and the national hymn derived from it, Churchill’s exhortation to fight on the beaches, and the arcane ceremony of royal funerals and coronations. Mythic England is also, significantly, free of all the fraught political heritage of modern Britain.

Why produce such a dramatisation at a time when Britain is in crisis on so many fronts? As the pandemic recedes (perhaps) the country still faces the desperately serious problem of child poverty, which UN rapporteur Philip Alston attributed in his 2018 report to the Conservative government’s “punitive, mean-spirited and often callous approach.” Recent legislation has cleared the way for sewage dumping in rivers and coastal waters. And the disasters of Brexit continue to roll out.

Many viewers may nevertheless be drawn to the series (as I admit I was) by the lure of Branagh’s performance, which takes its place in a newer tradition. Since Michael Sheen made the transition from comedic political impersonator to nuanced performances as Tony Blair in The Deal (2003) and The Queen (2006), a succession of star actors have taken on the challenge of embodying a public figure in a tour de force transformation that blurs the line between acting and impersonation.

Standout examples include Meryl Streep as Margaret Thatcher in Iron Lady (2011), Gary Oldman as Churchill in Darkest Hour (2017), Christian Bale as Dick Cheney in Vice (2018) and, most recently, an unrecognisable Sean Penn as John Mitchell in Gaslit (2022). The difference between a dramatic interpretation — Claire Foy’s rendition of the young Queen Elizabeth in The Crown (2016–17), for example — and the virtuoso challenge in these cases begins in the makeup chair.

Deciding whether to work “inside out” or “outside in” has been core business in actor training for generations, and the question has become even more acute as advances in camera technique have made it possible for viewers to almost literally see what lies behind the eyes of a character on screen. A fine actor can evoke the elusive inner life of a well-known person through psychological interpretation, but is it actually more effective to access the psyche through the forensic capture of voice and manner?

In the case of Branagh’s Boris, the question must be answered in the negative. Branagh portrays his behaviour with startlingly accuracy but, as the camera closes in, the face just doesn’t seem to belong. An image search for close-up shots of Johnson shows that he never stops mugging for the camera, which rarely catches him off-guard. When it does, the eyes are hard, almost blank, in stark contrast to the thoughtful, reflective qualities of Branagh’s expression.

The producers’ quest for verisimilitude led to a search for actors who bore a physical resemblance to key members of cabinet. The results are, if anything, a bit too subtle and, in line with the approach to Johnson, a bit too nice. Shri Patel as Rishi Sunak seems keen to provide assistance to British workers under lockdown. Really? Simon Paisley Day’s Dominic Cummings is a convincing backroom apparatchik, and the only cast member true to the ruthless banality of the original.

For all the fine art Branagh and the production team have brought to this docudrama, a more accurate picture of the rogues gallery currently occupying Westminster is to be found on Spitting Image. It seems Britain has been spared another spell of Boris in the latest leadership debacle, and Sunak may settle unease in the financial sector, but John of Gaunt’s original England, “the envy of less happier lands,” shows no sign of return. •