Labour has averted catastrophe, but the stunning result leaves the country with no way to negotiate Brexit 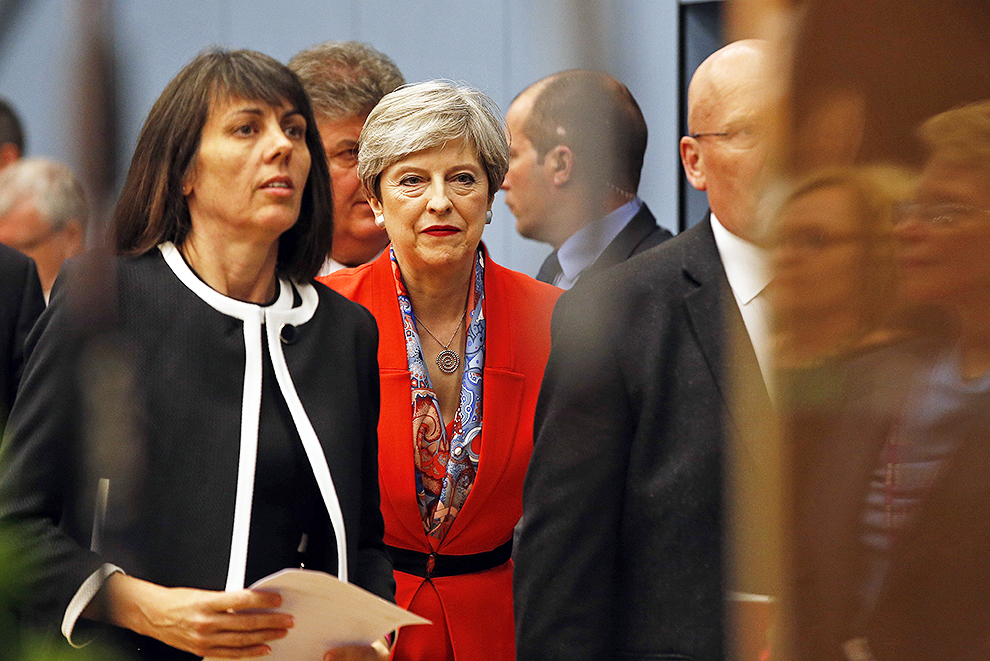 Phyrric victory: prime minister Theresa May arrives for the declaration of the result in her constituency in Maidenhead. Alastair Grant/AP Photo

It was a dismal campaign that never sparked into true life – at least until 10pm on election day, when the exit poll results were announced. What did it feel like? Take two tectonic plates, an earthquake, a landslide and an avalanche. Mix and stir, simmer for a microsecond, pour, then sip. Whoosh!

Most polls had been predicting that the incumbent Conservatives would advance and Labour retreat. But interviews with around 30,000 voters as they emerged from polling stations indicated the exact opposite. Instead of consolidating their majority in the House of Commons, the Tories would lose seventeen seats and finish with 314 – twelve short of being able to form a government – while Labour would gain thirty-four, increasing their number to 266. Among pollsters, politicos and pundits, the mental switchback ride was immediate and drastic.

The gap might sound wide enough to give the Tories some comfort. It may yet shift in either direction. But for Theresa May, a prime minister who had held this “election of choice” to give her the mandate she wanted to negotiate Brexit with the European Union, it represents a humiliation to match those of her predecessors Edward Heath in the 1970s and John Major in the 1990s. Their electoral defeats represented the end of an era in Conservatism, and in the latter case a new one for British politics.

Theresa May is toast. By contrast, Jeremy Corbyn is the big winner. After a vigorous campaign which contrasted markedly with the Tories’ listless one, he has led Labour to what looks like a substantial leap forward. True, it is also, after 2010 and 2015, the party’s third successive defeat. But some victories resemble defeats and vice versa, and this is such a night.

Corbyn’s retail package, with its generous funding promises to every voting target, may have been derided as tooth-fairy socialism. But it evidently struck chords, not least among students and young people, many of whom have been vocal Corbyn supporters in his own very personalised campaign. A plausible way of seeing the result is that it is part generational revolt, part payback for Brexit. For many, it will justly be a “Bliss was it in that dawn to be alive” moment.

Only when the smoke clears will it be possible realistically to calibrate the likely colour and shape of a new government. In the event that the Tories are unable to stay in power, which might in any case require support from Northern Ireland’s Unionist (that is, pro-British) parties, the onus would be on Corbyn to find left-leaning allies. The candidates are the Liberal Democrats, the Scottish National Party (which will lose seats but remain the largest party in Scotland), the Greens (with one member of parliament), Plaid Cymru (Welsh nationalists, with perhaps three) and Sinn Féin (pan-Ireland nationalists). Sinn Féin, which found renewed life from the 1980s as the political wing of the Irish Republican Army, has never taken its seats in the Westminster parliament. Would its leaders’ status as close allies of Corbyn tempt them?

Such intra-party manoeuvres will prove crucial for more than domestic reasons. The Brexit talks are scheduled to start on 19 June. The European Union has been busy agreeing its strategy and drafting position papers on every item. Beyond Theresa May’s bold claim that “no deal is better than a bad deal,” Britain has nothing on the table. Who will Michel Barnier and his colleagues negotiate with?

Even more than that, could the election result put Britain’s departure from the EU in doubt? The referendum a year ago, when people voted by 51.9–48.1 to leave, appeared to have settled the matter. May’s premiership was built on delivering that outcome. The political route lay through bringing supporters of the declining United Kingdom Independence Party, or UKIP – there were 3.8 million in 2015 – back into the Conservative fold, as well as luring Brexiteers among the Labour Party.

A quite different realignment has shredded that plan. Labour’s historic working-class core in northern England, Wales and Scotland, and its metropolitan centres, including London, with their high student and graduate populations, have fused into a powerful voting bloc to bring the party back into serious governing contention. The latter groups are among those most alienated by Brexit; many of the former have either put last year’s Brexit vote aside, been energised by Corbyn’s offer, or been given no incentive to back May and the Conservatives.

Even if that social and generational coalition can be translated into a governing one, the path to halting, delaying or more likely modifying the Brexit process – whose legal process was triggered in late March – will be just as tough. But this extraordinary and still unfolding election is going to create a new framework of political possibility.

A consolation for the Conservatives will be its strong performance in Scotland under Ruth Davidson, whose modern brand is for many a refreshing contrast with Theresa’s staid one. It may be too early for her to be a contender for leadership of the Conservative and Unionist Party (its full title). But the confident liberal outlook of the thirty-eight-year-old may be a model for the party south of the border, following May’s inevitable departure. George Osborne, Conservative chancellor-turned-newspaper-editor, chose not to stand in this election and is out of the running for the leadership on that account. Boris Johnson will again be a favourite. But the Tories now face a task of renewal made much harder by May’s failed experiment, and their probable direction is far from clear.

For the SNP, this is a night of singular bitterness. The defeat of former chief Alex Salmond and its parliamentary spokesman Angus Robertson in their constituencies is both grievous and symbolic. The party, riding the independence wave, won all but three Scottish seats in 2015. This result, retribution for policy troubles and its leader Nicola Sturgeon’s loss of shine, is also a severe blow to the independence cause. For that, it needs not just governing authority but political momentum. Now lost, the latter will be very hard to regain, at least in the next electoral cycle.

For Labour, the mild regret of defeat is far outweighed by exuberance at its substantial increase of votes and seats, and in all areas where it was a serious challenger. Its likely 41 per cent of vote share is the biggest since Tony Blair’s second victory in 2001, and will perhaps be only a couple of points behind the Conservatives’.

After his own almost two years as leader, and weeks of oratory before impressive crowds in Labour’s heartland areas, Corbyn has done far more than avert an oft-predicted catastrophic loss. In the eyes of his legion, this outcome seals his right to stay and fight on; for his inner coterie, it vindicates their “left project.” His party opponents, numbers of whom owe their constituency wins to the campaign he led, now have every reason to rally to him.

Such assessments, on the basis of what is known with around a quarter of the constituency votes counted, will soon need updating and refining. The moment when the exit poll doused the election day sacrament, and hurled the UK into the unknown for the second time in a year, is already distant.

Manchester University’s Rob Ford, writing on the eve of the vote, captured well the excitement to come. Every general election

seems to have its own brand of uncertainty. Something is always in doubt on the last night. If not “who wins?” then “‘how big?” Whatever happens, it’s been another lesson in how fascinating electoral democracy is – complex, ever-changing, confounding expectations.

Looking ahead, the electoral arithmetic is such that it may require British voters to do it all over again in the coming months, reprising 1974 as “the year of two elections.” A more definitive prospect on that and other matters arising awaits the dawn. In the meantime, Britain’s voters, this time especially young ones, have produced the third “pencil revolution” in two years. Much of what was written in the wake of the 2015 election stands:

An earthquake in Scotland, a sensation in England, drama in Wales and upset in Northern Ireland. The United Kingdom can still do spine-tingling political theatre to rival its ceremony and pageantry. A thrilling climax to its election on 7 May at once mauled the expectations of pollsters and pundits, and tossed the fracturing multinational polity a fearsome puzzle. The ingenious minds of its best codebreakers will be needed to solve it.

Whatever comes next – and a many-sided debate is already under way – there is something, well, glorious about the last twenty-four hours. The people took charge, inspected their would-be governors, and made their judgement. It was a pitiless and brutal spectacle. The landscape after battle is full of corpses. Yet there is no blood. Sometimes, you’ve just got to hand it to democracy.

The last line is painful in light of the violence that disfigured the latest campaign, as it did during the Brexit referendum with the murder of a member of parliament. More widely, this sequence of three votes – with Brexit in the middle – is sobering. This is still a country of permanent involution. Arguably, more rather than less so after this result. Nonetheless, “you’ve got to hand it to the people.” They, and democracy, won. Even when they have made the task of Britain’s political leaders as hard as it has ever been. •