Polls and preferences: the new challenge for election watchers 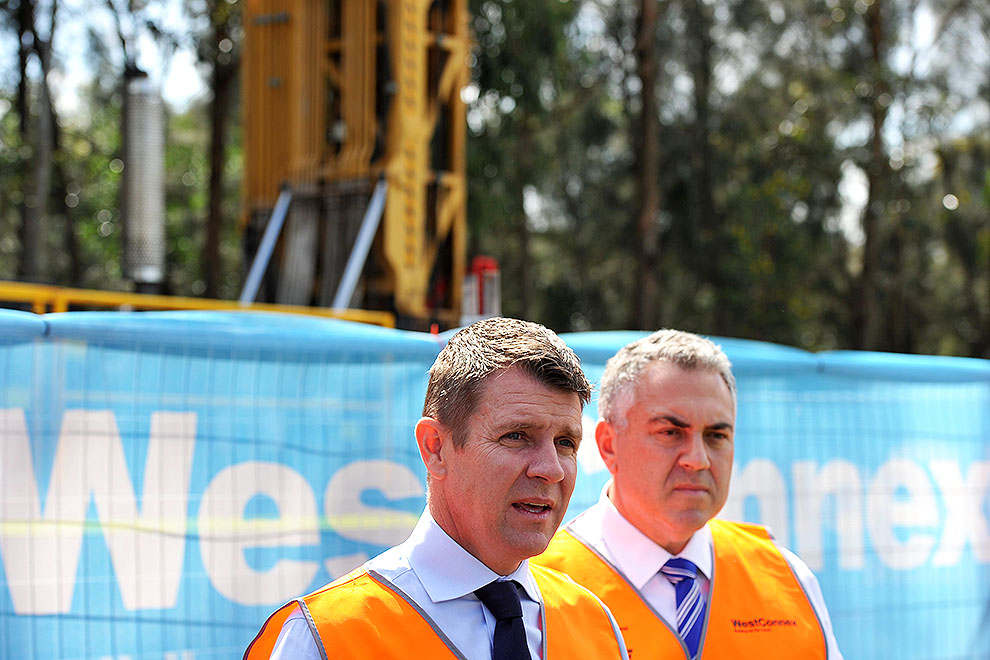 Will NSW voters use their preferences to reward or punish premier Mike Baird next month? The premier is shown here with federal treasurer Joe Hockey at the site of stage 2 of the WestConnex motorway project in Sydney, on 15 September last year. Paul Miller/AAP Image

Between now and the federal election, due late next year, dozens of polls will be thrust on us. For the next month, a deluge of them will come from New South Wales. But we’ve got a problem: we can’t be sure they are right any more.

We saw that dramatically illustrated in the Queensland election result. Apart from Morgan, the pollsters predicted the two-party-preferred vote would be LNP 52 per cent, Labor 48 per cent. The actual outcome, on Antony Green’s estimate, was very different: LNP 49, Labor 51.

As Peter Brent explained in Inside Story immediately after the election, this wasn’t because the pollsters got their polling wrong: Queenslanders voted exactly as they had told the final Galaxy Poll they would.

So what went wrong? The pollsters tripped themselves up by assuming that preferences would flow as they had at the last Queensland election in 2012. In fact, the preference flows this time were very different, as this summary shows:

Why? One reason is that Queensland, like New South Wales and the Australian Capital Territory, has made preferences optional. This means the polls in those states now include two unknowns: how many voters will cast preferences, and whom they will flow to.

In 2012, the plague-on-both-your-houses voters mostly sat on the fence. This time, hostility to the Newman government saw a huge shift of second preferences to Labor, enough to give it an extra 3 per cent of the vote.

A second factor, as Green explains, was unique to Queensland. In 2012, the biggest minor party was Katter’s Australia Party, which didn’t allocate preferences. This time, the Katter party stood in only eleven seats, and its share of the vote slid from 11.5 per cent to just 1.9 per cent. In 2015 the Greens were the biggest minor party, with 8.4 per cent, and their preferences flowed strongly to Labor.

If you tell a pollster you plan to vote for a minor party or independent, he or she will always ask you which way your preferences will go. But in recent times, most have just filed away that information, and instead used the actual preference distributions from the previous election. That’s because, at some elections, it had proved to be a better guide.

Not any more: this was the second election in ten weeks where the old rule had been overturned. In Victoria, the Fairfax Ipsos poll in the Age correctly predicted a Labor victory by 52–48 in two-party terms – but only because it went back to the old system of using the voters’ stated preferences rather than those from the previous poll.

The Age found the preference flows from the last election implied a 50–50 result: too close to call. Ipsos’s polling of first preferences was mostly accurate – apart from sharply overstating the Greens’ vote, and understating Labor’s – but the usual methodology would have given the wrong result, mainly because, as the table shows, between 2010 and 2014 preference flows shifted Labor’s way:

The shift in preferences gave Labor an extra 1.1 per cent of the vote – and majority government. Had preferences flowed as they did in 2010, the Liberals would have won Bentleigh, Carrum, Frankston and, probably, Prahran. The eighty-eight seats would have been split, with forty-four to Labor, forty-two Coalition, one Green and one independent. Labor would have had to form an unstable minority government.

The Greens contributed part of the surge in Labor’s vote, with 82 per cent of Green voters giving preferences to Labor. But even voters for parties of the religious right split their preferences in all directions, despite their how-to-vote cards directing them to the Coalition.

With New South Wales facing an election on 28 March, and the Abbott government to face the voters within eighteen months, what’s the moral to keep in mind when we read the polls?

First, if a new government drives voters offside, it will suffer on election day not only on first preferences, but also on second preferences – and they can be just as deadly. The Queensland and Victorian results show the polls can no longer assume that people will deliver preferences at the next election as they did last time. No formula is perfect, but trusting people when they say where they will direct their preferences is more reliable than trusting them to do what they did last time.

The latest Newspoll, released on Tuesday 24 February, repeats the mistake it made in Queensland. It reports voters’ first preferences as:

It then groups the Greens and others together, and allocates 60 per cent of their vote to Labor and 40 per cent to the Coalition, roughly matching the 62/38 split of their preferences at the 2013 election, to come up with a two-party-preferred vote of 53 per cent Labor, 47 per cent Coalition. That’s a swing of 6.5 per cent – yet the swing from Coalition to Labor and the Greens is almost 8 per cent.

Any poll that continues to rely on preference splits from 2013 is likely to overstate the Coalition’s two-party vote, as Newspoll and Galaxy did in Queensland. The same will be true for New South Wales.

Second, while the NSW election looks unlikely to be as close as those in South Australia, Victoria and Queensland, remember the uncertainty about whether voters will give preferences to any party at all. In 2007 and 2011, most NSW voters for smaller parties just voted 1. Will they do so again? And if not, will they choose to punish Mike Baird for disappointing them – or reward him for delivering on their hopes for better government? •

Tim Colebatch is a former economics editor of the Age. He has been writing on opinion polls since the 1970s.