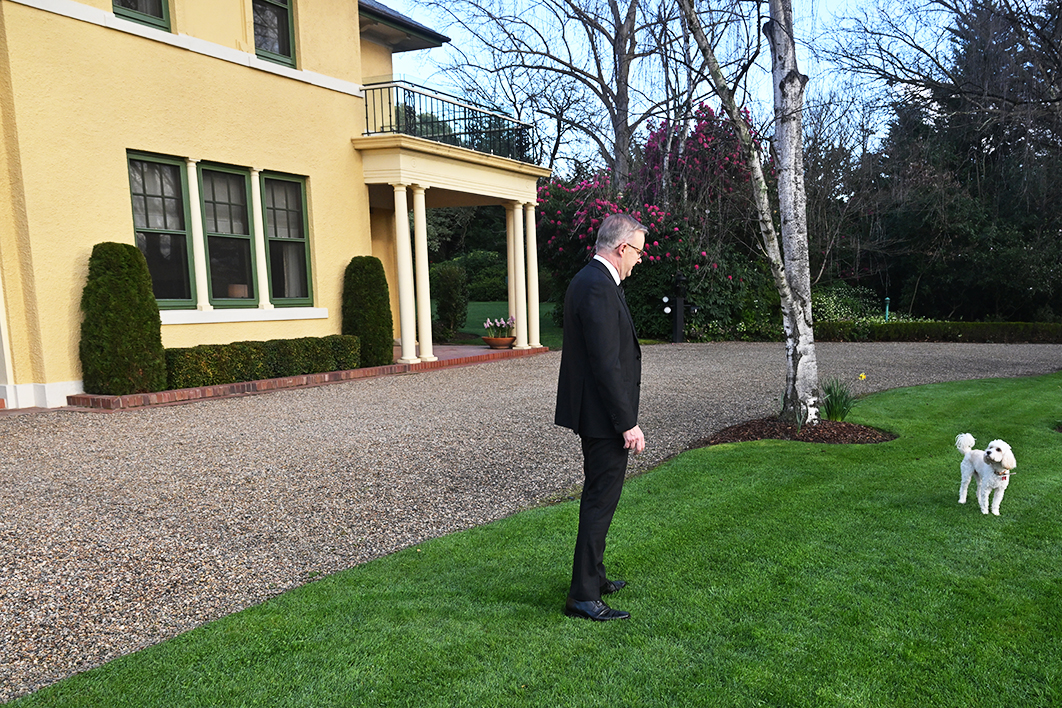 Trouble ahead? Prime minister Anthony Albanese with Toto at the Lodge earlier this month. Mick Tsikas/AAP

It might feel like an eternity, but barely four months have passed since the federal government changed and Anthony Albanese became prime minister. That’s the equivalent of Tony Abbott’s Coalition government in January 2014, Kevin Rudd’s Labor in February 2008, John Howard’s Coalition in July 1996, and Bob Hawke’s Labor in July 1983. In other words, nothing that has happened so far gives us an inkling of the twists and turns ahead.

Current two-party-preferred polls are more encouraging for the new government than they were for Abbott at this point, but not as heartening as for the other two. Does this point to anything? No. Both Abbott and Rudd were dragged down by their parties before their governments’ first re-election. Howard was looking rather shop-worn by the time of the 1998 election, which he survived with the lowest national two-party-preferred victory in history. Only after the 2001 election was he the untouchable man of steel.

They don’t call it a honeymoon for nothing. Young governments find they can make mistakes and barely anyone notices, while ageing, more experienced ones can get away with much less. Fledgling government ministers are boosted by their new positions at the top table.

On the other side of parliament, stripped of the authority of incumbency and the allure of power, the nakedness of former Morrison government members is faintly embarrassing. Did this bunch really run the country for so long? Was that Liberal leader really home affairs minister so recently?

Scott Morrison’s bizarre, secret swearings-in to multiple portfolios provides further revisionist fuel. Were the higher echelons of the just-deceased government particularly lacking in talent, or does it just seem that way?

The early Hawke government went to town on the fiscal misdeeds of its vanquished predecessor, and Howard and team used the same playbook thirteen years later. While Rudd and his treasurer Wayne Swan were negligent on this front — yes, it’s harder when you inherit a budget surplus, but they barely tried — Albanese and Treasurer Jim Chalmers aren’t making that mistake. They’re rarely missing an opportunity to employ the “t” word — a trillion dollars of debt. It’s not fair, it’s not honest, but politics is often like that.

What did the 21 May result tell us about voters’ changing behaviour?

After every election the Australian Electoral Commission provides us with two-party-preferred results for all House of Representatives electorates. Those two parties are Labor and the Coalition, whether or not the actual two-candidate-preferred count was between them. (The Liberals are given a 51.4 per cent two-party vote in Warringah, for instance, though Zali Steggall was the victor.) Total all 150 seats and you have the national two-party-preferred vote.

In 2007, a national Labor vote of 52.7 per cent saw eighty-three of the 150 seats return Labor two-party-preferred majorities, and all of them were won by Labor. This time eighty-four seats out of 151 recorded two-party victories for Labor, but MPs representing seven of them sit on the crossbench: four Greens plus independents Andrew Wilkie in Clark and Dai Le in Fowler, and — the surprise Labor two-party win — the Centre Alliance’s Rebekha Sharkie in Mayo.

So although Labor’s countrywide vote of 52.1 per cent was well below 2007’s, and although its seventy-seven-seat haul was lower than 2007’s eighty-three, its victory over the Coalition, nineteen seats, was larger by one than it was fifteen years ago.

The leakage to the crossbench was even worse on the other side. Of the Coalition’s sixty-seven two-party-preferred wins, nine were taken by independents and minor parties.

The massive crossbench is a result of the decline of support for the major parties, and there is no reason to believe it won’t continue over the medium term. Recent history tells us that Labor will have difficulty evicting the Greens from their lower house positions. We don’t know if the teals will prove similarly durable, nor the extent to which they will become, or be seen as, a quasi party. The future of Dai Le, the independent who won Fowler, is similarly unpredictable.

Does it worry you that the party that won 33 per cent of the primary vote formed government? It’s a bit like Emmanuel Macron becoming French president in April despite receiving just 28 per cent of the first-round vote. But at least Macron topped that first round.

You’d rather the Coalition, with 36 per cent primary vote support, had been sworn in? But then there’s no point having preferential voting, which gives the voter multiple bites at the cherry. Overseas, our voting system is often called “instant run-off” because it roughly replicates the French-style two-round system, but does it on a single voting occasion, using the one ballot paper.

Back in 1995, France’s first-round winner Lionel Jospin lost the second round to Jacques Chirac. A majority of the voters who cast a ballot two weeks after the first bout found Chirac the lesser of two evils. Same with primary vote versus two-party-preferred here. Australian federal elections have seen primary vote losses turned into two-party-preferred wins three times: 1987, 2010 and, now, 2022. The victor on each occasion was Labor.

Even under the awful first-past-the-post voting system, which Britain and Canada still have and New Zealand used to, the overall vote winner can lose the seat count.

Perhaps you’d prefer more proportional results, giving parties representation closer to the share of support they received? Then you need an electoral system of — drumroll — proportional representation. Single-member electorate systems are in many ways a relic of a pre-party time, when men (as they were) were elected to represent their geographic constituencies in parliament. Much of our system — indeed our Constitution, and most obviously the make-up and powers of the Senate — is like that. (I’ve argued before that PR in our lower house would improve governability by giving the upper house more incentive to make life easier for the executive.)

But back to our current government, and the question of how long Anthony Albanese will be prime minister. Our longest-serving PMs — Bob Menzies, Howard and Hawke — were elected at or near the beginning of longish periods of sustained international economic growth. They got the boasting rights and the favourable comparisons with their predecessors.

We live in different, stranger times, with unemployment very low yet growth sluggish and wages stagnant. And leaders are more disposable these days.

Both major parties are on the nose, but the contradictions in the Coalition’s support base are more glaringly on display because it’s in opposition. Peter Dutton gives every indication he won’t try to win back teal territory, and will instead prioritise what used to be seen as swing seats, the ones that tend to go to whoever forms government. They’re in the outer suburbs and regions: “aspirational,” socially rather conservative, not very multicultural, the fabled western Sydney seat of Lindsay being their archetype. But those voters and seats simply aren’t numerous enough to come close to a governing majority.

They also have a habit, at state level, of swinging to narrowly elected incumbents. (While the states and territories boast plenty of examples, we’ve not had a federal opposition squeak into government at an election since the formation of the two-party system over a century ago.)

That’s one way it could turn out: a stronger vote for Labor in three years. But Dutton is unlikely to be leader at the next election, and his successor would probably take a different tack.

And with a global recession on the cards, the pendulum could — in the context of low major-party support — swing back, quickly.

Did I mention we live in strange, uncertain times? •