The week’s events raise the age-old mystery: exactly what is this strange beast? 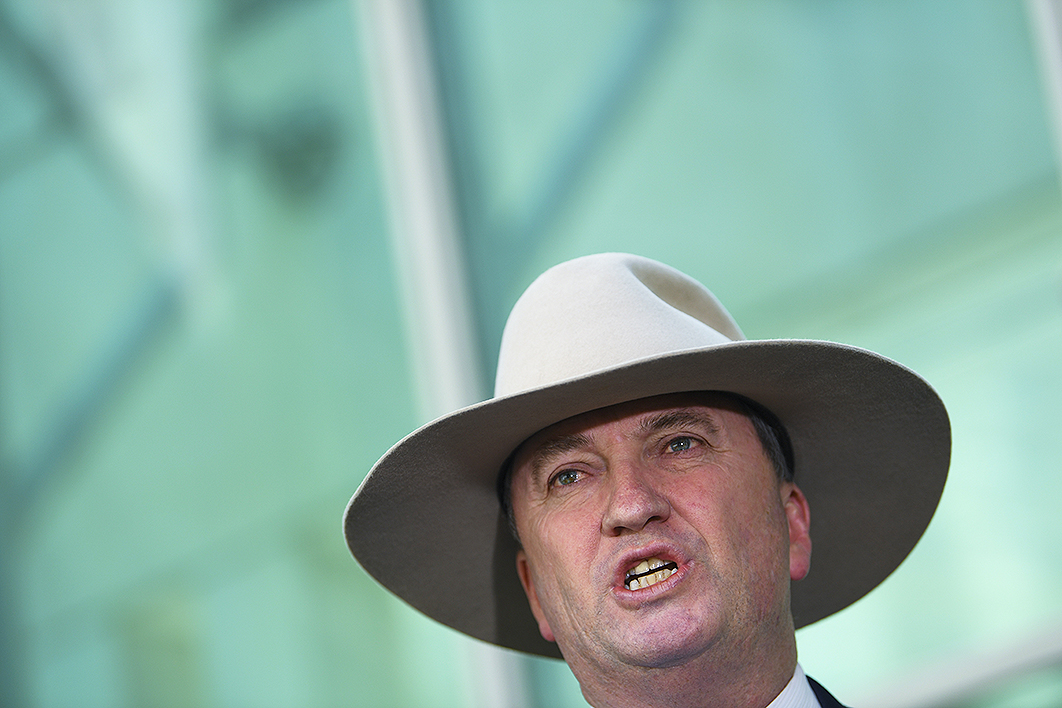 On Friday, Barnaby Joyce put the gloves back on. After long days of morose self-flagellation, the deputy prime minister sprang up and about, doing what he does best: lashing opponents with those considerable verbal skills. Only this time the attack was directed at his senior partner and prime minister. Still, it must have felt good to be back on the front foot, seizing the day, marshalling the troops.

Let’s hope Barnaby squeezed every bit of enjoyment out of the experience, because he is finished as Nationals leader. Joyce can’t survive this — he will be gone long before the next election — and the chief question is: when he falls off the cliff, will he drag Malcolm Turnbull with him? Whether Joyce fully knew how much damage he inflicted on Turnbull at his press conference — behatted, in the shade, surely self-parodying even to a rusted-on Nationals supporter — or whether he truly hopes that if he hangs on long enough the media will move to something else, is unclear. Probably a bit of both.

Media frenzies do subside, caravans move on, our journalists quickly shift to the next obsession, but that can’t happen in this case. Those things that should have claimed his scalp — the creation of jobs in ministerial offices for his girlfriend, accepting (and perhaps seeking, although he denied this in parliament) free rent from a local businessman, and questionable travel claims — could have by themselves blown over. But what he can’t survive is the less important, salacious stuff: the marriage break-up and its surrounding soap opera, because there will always be the new partnership and baby to remind us.

We do not know what has been said this week behind closed doors, but Turnbull was presumably frustrated by Joyce’s unwillingness to budge. The prime minister’s Thursday press conference also scores generously in the wackiness stakes: in its attack on his deputy, and the very unwise addition to the ministerial code of conduct, the ban on sex between ministers and their own staff.

As has been widely pointed out, press-gallery job descriptions will now officially include chasing down hints of hanky-panky, and given the impossibility, in many cases, of the production of definitive proof, it is not clear how this will play out. A minister sending, à la Joyce, a potential inamorata off to a colleague’s office, even creating a special position with increased pay — these actions, Turnbull implied, were and will remain acceptable.

This seems another example of the prime minister, in the rush to be seen to take decisive action, not quite thinking things through.

But Turnbull’s press conference did succeed in deflecting media attention away from those important questions about Joyce’s behaviour to the salacious ones. Everyone is now talking about the sex ban.

Commentators prattle endlessly about the Labor Party’s twin constituencies, inner-urban progressives and working-class conservatives, but the Coalition’s supporters are no less divided, along social and economic lines, and this is exemplified, though not restricted to, in the Liberals–Nationals split. And when a political outfit is doing poorly, its faultlines become more discernible.

Australian political science literature has long pondered the question of whether Australia has a two, three or two-and-a-half party system. In the international context, our Coalition is a strange hybrid beast, somewhere between two factions and a coalition.

Currently the Nationals are numerically strong. At the 2013 change-of-government election, the Nationals party room was boosted by new MPs in Page and Capricornia, won from Labor. Perhaps more importantly, they also regained the heartland seats of New England and Lyne, previously pilfered by independents. Then, in 2016, when Liberal lower-house losses shot well into double digits, the minor partner increased its numbers by one (Murray), albeit at the expense of the Libs.

Joyce, the first Nationals leader in living memory who most Australians could actually name, had 19 per cent of the joint party room and a massive by-election win under his belt. He started to throw his weight around. Last December we saw his “captain’s pick” demotion of Darren Chester and Keith Pitt — against, in the case of Chester, the prime minister’s wishes, as Turnbull stated publicly.

When Barnaby became leader in early 2016 I suggested that his vision of an emboldened Nationals tail wagging the Coalition dog would prove unsustainable, and something would have to give. Since then, Turnbull’s poor election result and loss of stature have produced a different dynamic, but we’ve arrived at about the same place.

If the “Coalition” were a party, the events of Thursday and Friday would have resulted in the leader’s sacking the deputy. If it was an actual “coalition,” the arrangement would now surely be torn up, and Labor, as the largest party, might be forming government.

As it is, Turnbull can, in theory, strip Joyce of his ministerial portfolios, though not the Nationals leadership — but even he is not that reckless.

It’s only a matter of time before the Nats finish Barnaby off, and his replacement will be another in a long line of Nationals leaders virtually unknown to anyone outside the political bubble.

After that, we will ponder Turnbull’s mortality. On top of this, Newspoll #30 is coming soon.