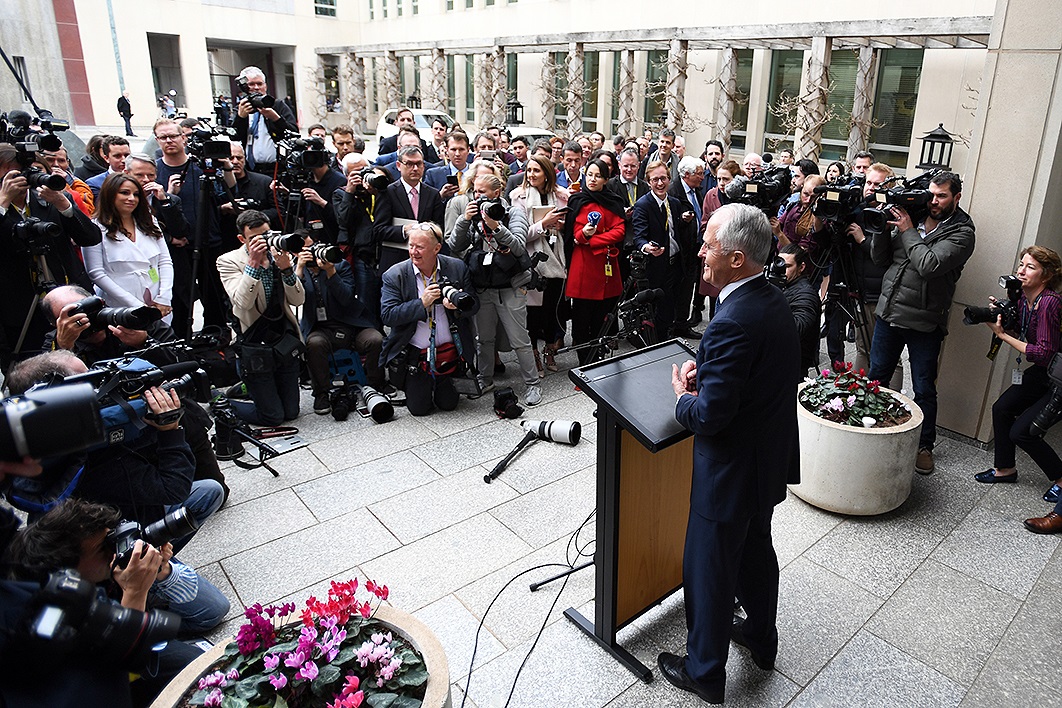 “A house divided against itself cannot stand.” Abraham Lincoln was speaking of the division between free states and slave states within the American union in 1858. But his words are true for the Liberal Party today, after bitter factional warfare has destroyed its climate change policy and, probably, Malcolm Turnbull’s leadership.

Turnbull is not dead yet. At 1pm today he launched a two-pronged effort to remain prime minister. First, he demanded that the Dutton camp produce a petition signed by a majority of Liberal MPs and senators to request a party meeting on the leadership. Second, before such a meeting takes place, solicitor-general Stephen Donaghue should deliver his opinion on whether Peter Dutton is eligible to sit in parliament at all, given that his family trust runs childcare centres that receive money from the government.

If Dutton’s supporters can get forty-three MPs and senators to sign the petition — they couldn’t do so last night, but last night was a long time ago — then Turnbull will call a party meeting for midday Friday. Someone will then move a motion to spill the leadership positions. If that motion fails, Turnbull will remain PM. If it passes, he promised today, he won’t contest the position, making way instead (we assume) for Scott Morrison.

Some may recall that Turnbull promised a similar procedure when Tony Abbott launched his leadership challenge in 2009 — only to renege when the spill motion passed by just one vote. Turnbull then renominated, against not only Abbott but also his own intended successor, Joe Hockey. Turnbull beat Hockey, but lost to Abbott in the runoff. He and Morrison should remind themselves of that.

This dramatic turn of events was triggered this morning when probably the most respected figure in the government, finance minister Mathias Cormann, led a group of three ministers previously in Turnbull’s camp to tell the PM that he had lost the support of the party room, and that they had switched their support to Dutton.

Tuesday’s party room was an earthquake, but the PM survived it. Cormann’s decision was a devastating aftershock that has left him tottering. Unless the solicitor-general opines against Dutton, the house of Turnbull seems likely to crumble tomorrow. If so, Australia’s new prime minister will be either Peter Dutton or Scott Morrison.

Who? Why? If you follow the polls, this is bizarre. Just two weeks ago, Essential Research asked Australians who they wanted to lead the Liberal Party. Their answers were:

We have heard Dutton supporters like Concetta Fierravanti-Wells justify pulling down their leader by claiming to represent the party base. It is pretty clear that they don’t.

Then there was last night’s ReachTEL poll — commissioned by the CFMEU, sure, but it’s a straightforward poll. Asked whether Dutton as prime minister would make them more or less likely to vote Liberal, 55 per cent of Australians said it would make them less likely, and just 23 per cent said more likely.

Even among Liberal voters, 50 per cent said they would be less likely to support the party if Dutton became its leader (that’s the party base!); just 29 per cent said Dutton would make them more likely to vote Liberal. Only Nationals and One Nation voters wanted Dutton rather than Turnbull. Liberal, Labor, Greens, others and undecided voters all heavily preferred the guy who’s there now.

Then there was yesterday’s Morgan poll, carried out by SMS, testing how Turnbull and Dutton respectively stand up against Bill Shorten. It found that Turnbull still maintains his usual lead over Shorten, by 52 per cent to 44.5. But under Dutton, that would swing around dramatically, with Shorten preferred by 59 per cent of voters, and Dutton by only 36.5 per cent.

What is going on here? We are used to leadership challenges every two or three years now, but usually they are aimed at saving the party from defeat. This one appears more likely to ensure its defeat. It looks like electoral suicide.

Turnbull’s parting words today were to say that if the spill motion succeeded, the new leader should seek an immediate general election. I think he is right. An early election to resolve the issue would be in Australia’s interests, and that of the new leader himself.

If Dutton becomes prime minister, it is difficult to see him surviving an immediate vote of no-confidence in the House. Of the crossbenchers, only Bob Katter would be likely to back him in a confidence vote. Turnbull would probably be somewhere else. Several National MPs — Kevin Hogan, Darren Chester and Damian Drum — have hinted that they might not support him, and who knows what the Turnbull supporters might do.

If Scott Morrison emerges, like Steven Bradbury, as the last man standing, he will have to tie his hands by making huge compromises to keep the party together. He would be relying on goodwill, and there doesn’t seem to be a lot of that around in the Liberal party room. Many of those on both sides of the divide will want ministries: Tony Abbott for one, and many of those now supporting Dutton. To put a ministry together would put a lot of people’s noses out of joint. He would have to work flat out to keep everyone on side.

And then there is the small matter of climate change policy. The government can’t go to the voters without one, but the PM would be in a weak position to get his way. The polls show an overwhelming majority of Australians want the government to do more on climate, and the Abbott camp has become feral in demanding that Australia instead openly break its Paris commitment to reduce emissions.

Dutton would have no choice but to seek an immediate election. Morrison might be tempted to sit it out. He is not the first choice of many Liberals, but nor has he many enemies. Given that Cormann is in the Senate and hence ineligible for leadership, Morrison is probably the closest thing the Liberals have to a consensus candidate. He could probably win a confidence vote in the House, which would give him time to choose.

The election does not have to be held before next May; that’s still nine months away. Morrison, like all politicians, has a high opinion of his own abilities, and might believe that he could use that time to build up support, define his own agenda, and work to heal the wounds that the last month has created.

But it would be a miracle if those compromises are enough to do the job. The divisions in the party are too wide to be closed by what goodwill the party room might grant him.

If an election is to be put off until May, then there is no valid excuse for denying Liberal Party members their right to choose who represents them. Those preselections would further inflame tensions between the moderates and hardliners.

And while every new leader is greeted with some goodwill from the electorate, it doesn’t last long. Malcolm Turnbull was leader for nine or ten months before the 2016 election: early on he reached stratospheric poll ratings, but by the time the election came, he was in freefall. Had the election been held a month or two later, Labor could well have won.

The events of the past two weeks have shown us that those on the hard right of the party think they own it. Their words and actions suggest that they think they are the only true Liberals, that they alone represent the party base, and the liberal wing of the party consists of interlopers like Turnbull.

This is completely false, of course, but a Morrison victory in the party room would not change their minds. Dutton too would have his problems.

The bottom line is that, even with the polls as bad as they are, the new leader might be well advised to go straight to the voters, and seek a mandate in his own right.

Of course it is unlikely that the Coalition would win the election: ReachTel found Labor ahead after preferences by 53–47. The average of the previous three polls, all by different companies (Newspoll, Essential and Fairfax–Ipsos), was also 53–47. On those figures, it would be a Labor landslide.

But a new leader would gain some bounce from being new, and there is no good reason to think the Coalition would do any better next May. If he wins the campaign, he could well become a party hero, as Paul Keating did in 1993, by winning an election that seemed to be unwinnable.

That would allow him to govern from a position of strength. It would give him more chance to control the party room, shape the consensus on issues, and use the powers of a PM to whip the party into line.

He would still have Tony Abbott to deal with, but with Turnbull gone, maybe that could be an easier task. He would still have to push and prod the party into a sensible policy on climate change, and establish a sense of overall direction, a reform agenda. None of this would be easy.

And, of course, it is more likely that Labor will win the election whenever it is held. But the most likely course is that the right wing of the Liberal Party will not be able to handle its differences with the left sensibly until it has spent years in opposition — and Tony Abbott has left parliament. ●

Tim Colebatch is a regular correspondent for Inside Story, and a former economics editor and columnist for The Age.